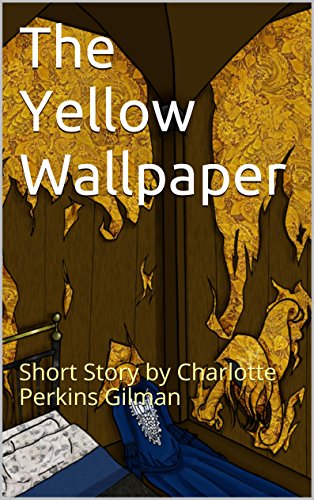 It was during my feminist awakening/introduction in college that I first read Charlotte Perkins Gilman’s famous short story, “The Yellow Wallpaper,” and I have been rereading it ever since. The wallpaper may be faded and torn, bu the impact of this story never dims.

Charlotte Perkins Gilman lived from 1860, born just on the cusp of the Civil War, through 1935. During her time, she became a well-known writer and speaker, and she is an influential feminist foremother. Her book Women and Economics makes points about the worth of women’s work in the home that were echoed decades later by Betty Friedan in The Feminine Mystique (the famous “problem that has no name”) and which still resonate today.

Gilman swore never to marry, seeing marriage as an institution that in those days did not offer women the chance to also pursue work. Despite this pledge, she did, however, marry, at a young age, bore a daughter, suffered from postpartum depression, and later, scandalously, divorced her first husband. She then moved with her daughter to California, began her career in ernest, managed to fix up her ex-husband with a friend of hers, and later, deciding they would be the more stable parents and, also radically, that a father deserved to be with his child as well as a mother, sent her then nine-year-old daughter to live with her father.

“The Yellow Wallpaper,” was inspired by Gilman’s own postpartum experience, as well as the time she spent being treated by S. Weir Mitchell, a noted doctor based in Philadelphia famous for creating what he called “the rest cure” for women: no activity, no work–nothing to trouble their little heads…

We met virtually last week for the Open Book Lunch ‘n’ Learn short story class to discuss this story and, as I said above, found its power undiminished 130 years after it was first published.

We plan to offer a repeat of this class as well as classes about other famous feminist literature: Kate Chopin, Edith Wharton, Virginia Woolf, and more. Email me (lynn@lynnrosen.com) for more info!