In a review in The New York Times of a new book by novelist Richard Powers, critic Jim Holt asked: Is it premature to talk of the “Powers Problem”? 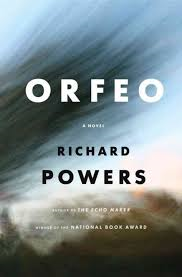 He goes on to explain that the novels of Richard Powers, eleven in all, often tend to be called “cerebral.” Powers is clearly an intellectual, and he writes about weighty, complicated subjects such as genetics, artificial intelligence, and game theory. His latest book, the recently-published Orfeo, tells the story of Peter Els, a retired composer in his 70s who returns to his love of chemistry, builds an in-home lab, and begins manipulating the DNA of bacteria. His lofty goal: to implant music into the cells. However, when he is accidentally discovered by law enforcement, they view his experiments as a terror threat, sending Els on the run.

The book contains complicated, lengthy passages that use highly-technical language to explain details of how both chemistry and music work. Hearing this, does it make you run for cover? Or does it intrigue you and make you want to read the book?

I like intellectual novels. I like to be challenged while I’m reading. After reading early reviews of this book and seeing that the critics seemed to think that Powers provided excellent storytelling that was not overwhelmed by too-heavy technical or scientific detail, I decided to read the book, and I loved it. I was moved by the story of Peter Els, and found him to be a very real, flawed character with a touching story, whose motivations I could understand.

I selected the book for my “Hot Off the Press” class to read. In this class, a group of passionate readers gather, under my guidance,  to discuss works of recently-published literary fiction. I looked forward to our discussion of Orfeo. I was moved by the book; I cried upon reading the final pages, something I rarely do these days with a book.

I was surprised to find my class had a very different reaction. They were not happy. They did not enjoy the detailed musical and scientific passages. They are smart people and smart readers, yet they felt overwhelmed, put off. One likened reading the book with its descriptions of avant garde music to an unpleasant experience she had had attending a concert of John Cage’s music. Another asked with irritation: “Who is he writing for?”

It’s a valid question. If the smart and engaged readers in my class can’t wade through this material, who can? Do you need a degree in science or music to read this book? Why does the author put so much detail in that he has to know most of his readers will not understand? Does this in any way enhance the book?

I didn’t understand everything I was reading. I confess to skimming some of the technically descriptive material. But not much of it – I really did try to read it, and I tried to understand it as best as I could. I learned some things, and, especially in the parts about music, what I most learned is how much I don’t know. Reading the author’s words describing how his character, the composer Peter Els, listens to music, describing what he hears when he listens, describing what he thinks about when he composes music, was fascinating. I love music: I love to listen to it and I love to sing. But I will never, never know even a fraction of what the fictional Peter Els knows, of what the very real Richard Powers knows, so for me, this entrée into a world never before entered, was a gift, a glimpse of a world I’ll never enter, but was glad to get a chance to briefly spectate upon.

The parts of the book that were not about music or science, but were about Peter, his life, his failed marriage, his attempts to create meaningful music, were just wonderful, and all the readers in my class agreed on that. I might like to ask Richard Powers “who were you writing for?” but I would still recommend this book. It contains a powerful story, incredibly beautiful language and thought, and snippets of wisdom that are well worth receiving.