Lynn has indeed been reading books!

Lynn’s been reading lots of books these days. In fact, she’s been gobbling them down so fast she almost can’t remember them! But here’s a quick summary of recent reads.

As a member of the implementation committee of the “One Book, One Jewish Community,” in Philadelphia, I’ve been reading many books with Jewish themes. I enjoyed a thriller by Charles Belfoure called The Paris Architect. Set in Paris during Nazi occupation, it follows a Christian architect who, against his will, becomes involved in creating hiding places for Jews. It’s very suspenseful in a way that at times reminded me of the anxiety I felt watching the brilliant film “Inglourious Basterds.” 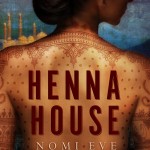 Also for the “OBOJC” committee, I’m reading a new novel by Nomi Eve. Henna House, set in Yemen in the 1920s, tells the story of a character named Adela and the passions and trials of her Jewish community. I’m also reading All I Love and Know by Judith Frank about a gay couple in Northampton, MA, whose life is thrown into upheaval when one of the men’s brother and his Israeli wife are killed in a suicide bombing, leaving them to raise their children.

For my “Hot Off the Press” class, in which we read brand new literary fiction, I just read Mona Simpson’s 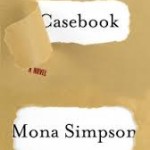 new Casebook. It tells the story of a family’s divorce from the point of view of the fourteen-year-old son. He begins spying on his mom to find out if she’s talking to her best friend about them letting their young sons watch “Survivor,” and winds up learning much more than he bargained for. I loved how the authorlooks at love, family and divorce from this point of view. You may know Simpson for her best-known novel, Anywhere But Here, about a mother/daughter road trip.

There’s ever so much more on my summer reading list, including a few classics, some Young Adult books (have not yet read The Book Thief!), a new novel called Perfect by Rachel Joyce, who first novel, The Unlikely Pilgrimage of Harold Fry, I really enjoyed, and some non-fiction about authors: The Trip to Echo Spring: On Writers and Drinking by Olivia Laing.