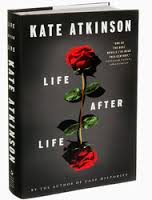 Kate Atkinson’s Life After Life is a book I admired more than I enjoyed.

I’ve always meant to read Atkinson, and have friends who have highly recommended her earlier crime stories Case Histories and Started Early, Took My Dog. When this new book came out, reviews seemed to indicate it was a departure in style for her, as well as something of a literary tour de force, so I decided to begin at the end, as it were, with her most recent book.

Life After Life is the story of…well, that’s hard to say. It’s the story of Ursula, born outside London in 1910 on a very snowy day. The plot tracks the path of Ursula, some of her family members, friends, and acquaintances, as they wend their way through two World Wars. That path, however, is far from straight.

This is a book that plays with timelines in a major way. Plot lines start and then stop, wind their way back to their starting point and begin again. Stories repeat with multiple endings. Characters live or die, survive or don’t; each character’s outcome changes in the story’s telling.

Atkinson’s literary feat is impressive. One pictures her in her study with a huge collection of Post-its hovering overhead to help her keep track of plot strands. Being the puppet mistress pulling these strings was no easy feat. The concept itself is imaginative and original; the execution is excellent.

When I say I admired the book more than I enjoyed it, what I mean is that, while reading it, I appreciated its literary acrobatics, but that kept me at a distance. While many of the characters, Ursula included, where quite likeable, compelling or entertaining, they did not so much draw me in as keep me watching from afar.

Nonetheless, I think the book well deserves the accolades it has received and I recommend it for readers of serious and well-written literary fiction. I do plan to include it in my one of my Open Book discussion classes this spring as well, so check the events page for more info!