I’m reading a YA (young adult) book called The Sixty-Eight Rooms by Marianne Malone. I found out about it when the author was interviewed on NPR. It’s based on the Thorne Rooms, which are a series of miniature rooms created in the 1930s and now housed at the Art Institute of Chicago. 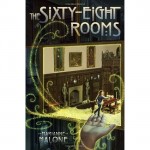 The premise is that the kids in the book become miniature and can go in the rooms and have adventures.I bring it up today because I just read a quote I really liked and want to share with you. One of the main characters, a girl named Ruthie, is talking with her father about her friend Jack’s mother, Lydia. Lydia is an artist and Lydia and Jack live in a really cool loft. Lydia is described as being quirky and outgoing. She relates to people easily and in a friendly way, and she’s a great cook.

Here’s Ruthie, speaking about her father:

“He had often commented that artists like her [Lydia] create their lives rather than letting other people set the rules. Ruthie was beginning to understand what he meant by that: if you want something badly enough, you have to make it happen.”