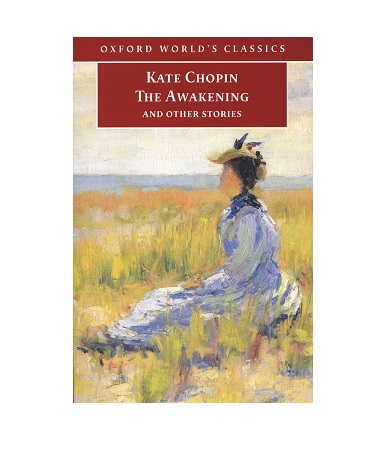 Kate Chopin started writing her novel The Awakening in 1897, and it was published in 1899.

Chopin had only begun her writing career about ten years prior to this, and she had built a good reputation for her short stories, publishing them in places like Vogue and The Atlantic Monthly and in several published collections.  She had also published one novel, called At Fault, but it did not attract much attention.

Chopin was born Catherine O’Flaherty in St. Louis in 1850, raised in a relatively well-to-do family, and well-educated. Her heritage on her father’s side was Irish, and through her mother, French Creole.

In 1870, she married Oscar Chopin and moved with him to New Orleans. Between 1871 and 1879, she gave birth to six children. Meanwhile, Oscar ran his commodities business into the ground, and in 1879, they moved to the countryside and became the managers of a general store.

Oscar died of malaria in 1882 and left behind considerable debt. For two more years, Kate tried to maintain their business. She also allegedly had some romantic flings, including one with a married farmer. (You will know that this is relevant once you read her work!) Finally, she succumbed to her mother’s urgings to move back home to St. Louis, although, shortly after she returned, her mother died.

In the early 1890s, a family doctor friend suggested she take up writing as a career. He suspected she would be good at it and thought it might be a good way for her to earn some income. Imagine that: becoming a writer to earn money – ha!

It’s also fascinating, to me at least, to note that this doctor encouraged Kate to write. In Charlotte Perkins Gilman’s well-known story “The Yellow Wallpaper,” published in 1892 and therefore overlapping with the time of Chopin’s work and available to Chopin to read, the female protagonist is strictly forbidden by her doctor to write, and this deprivation leads to her descent into madness. The doctor in “The Yellow Wallpaper” is based on the real-life doctor S. Weir Mitchell (a Philadelphian), whose famed “rest cure” for women prevented them from doing much of anything, lest it trouble their little heads. It’s a novelty to find that Chopin had a medical mentor who encouraged writing, and points to more of the novelty that appears in Chopin’s writing.

The Awakening tells the story of Edna Pontellier, a well-off young wife summering at Grand Isle, an island off the coast of Louisiana. Edna is originally from Kentucky, but has married into her husband’s wealthy Creole world. During the course of the novel, she has her awakening, in which she becomes aware of her status as a possession of her husband, as well as of her own youth, beauty, sensuality, and sexuality. The consequences are powerful and profound. And the literary public did not approve!

The Awakening was not well received. Chopin herself died not long after its publication age 54, when she had a cerebral hemorrhage after a hot day visiting the St. Louis World’s Fair in 1904.

It wasn’t until the feminist movement of the 1970s that The Awakening was rediscovered. It is now considered not only an important early feminist work but a significant literary work. Critics believe that, had its author lived to write more, she might have created an important body of work.

I enjoyed leading a discussion about this book in my virtual “Women’s Words” class the other night, and I was thrilled when I discovered that I was introducing this book to three first-time readers of the novel.

If you haven’t yet awakened to the beautifully written and moving story of Edna Pontellier, I suggest you discover it now. It’s a short book, a quick read with lasting impact. I’ve read it now several times over the course of my life, starting in college, and I get something new out of it each time.

The book is available in a free digital edition from Project Gutenberg HERE.

There’s another very short story by Chopin to enjoy HERE

And I recommend this wonderful piece by Barbara Kingsolver about the book HERE.