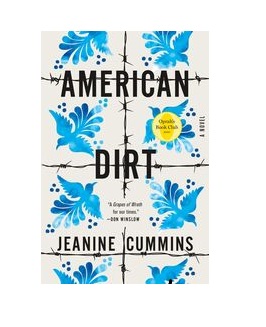 The novel American Dirt by Jeanine Cummins was the topic of the first meeting of the new Open Book Productions Virtual Book Discussion Class.

This is a book for which there are two main topics to discuss: the book itself, and the public response that the book has received.

First the book. In the dramatic opening scene, which takes place at a home in Acapulco, Lydia and her eight-year-old son Luca are the sole survivors of a brutal massacre. After this horrific event, fearing for their lives, they must escape.  The rest of book follows them on the challenging and often frightening journey which they must take to flee first Acapulco, and then Mexico. They ultimately wind up riding “La Bestia,” the freight trains which many refugees ride on top of to escape to “el norte.”

Have you seen these trains? If not, I encourage you to Google pictures of the hordes of people fleeing hardship by hitching rides on top of trains. You will find them to be very disturbing photos.

Back to the book itself… did the group like it? Some yes, some no. Some found it to be a very well-told, compelling, page-turning story. Others found flaws in the characterization of the son (too smart and articulate for an eight-year-old), or other aspects of the storytelling.

Overall, we thought, for those who are not aware of what is happening in Mexico and other countries to these refugees, that the book was a good starting place to becoming aware of the problem, something that will lead them to investigate other books, and sources of information.

And there, as they say, is the rub. The controversy around this book has to do with the reaction from Mexican writers and other writers of color saying: why is this white woman telling our story, and getting paid megabucks by the publisher to do so?

They also picked up on several missteps by the publisher in their initial promotion of the book: a letter that says that the author said “…migrants were being portrayed at the Mexican border as a ‘faceless brown mass'” and that she wanted to “give these people a face”; a launch party where photos were leaked of the centerpieces that mimicked the book’s cover design, complete with barbed wire.

We were fortunate to have a Mexican writer join our conversation at this point. Carlos José Pérez Sámano is a Mexican literary fiction and non-fiction author, and teacher of Creative Writing Workshops in Mexico, U.S.A., Kenya, and Cuba.

The book was picked by several major outlets as a featured book of the month, including by Barnes & Noble and by Oprah. A number of writers wrote to Oprah asking her to withdraw her selection, and Carlos was a supporter of that letter. (Oprah responded by convening some group conversations, which I have not seen but which are written about HERE.)

I don’t want to misquote Carlos, but I think it would be accurate to sum up some of this thoughts as follows: the desire to have Mexican writers represent themselves, for publishers to be more inclusive and offer more opportunities to writers of color, and the desire not to have his people portrayed in stereotype. It is true that one might come away from American Dirt believing that the entirety of Mexico is a crime scene peopled with “narcos.” I think another issue to consider, with this as with any work of fiction, is the authenticity of the voice. And every reader’s opinion will differ on that.

Further reading: HERE is an article that recommends some good follow up (or alternative, if you prefer) reading. Of this list, I have so far read The Lost Children Archive by Valeria Luiselli, and it is excellent (and tough going). (It is now available in paperback.) I also point you toward the work of Luis Alberto Urrea and of course, check out Carlos’ work.

Our next virtual book class is April 29th to discuss Crossing to Safety by Wallace Stegner. Details HERE.