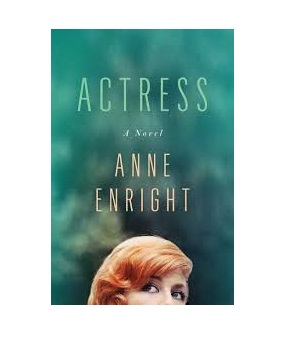 Eavan Boland, the revered Irish poet who taught at Stanford University for decades, died recently. In a country where male authors often dominate the literary landscape, she was noted as one of the premier Irish women writers. Several years ago, when she appeared at the Free Library of Philadelphia, I covered the event for The Philadelphia Inquirer, and I had the opportunity to interview her (you can read my Inquirer article HERE). She was kind, thoughtful articulate, and insightful. And when I asked who her favorite contemporary Irish writers were, without hesitation she said Edna O’Brien and Anne Enright.

I say all of this first of all, as a tribute to Boland’s life and work, and also as a lead-in to writing about Enright’s new novel, Actress.

Anne Enright’s method of telling a story will never take you on an easy path from point A to point B. As Ron Charles says in his review in The Washington Post, “The chronology would appear no more ordered than the flow of anecdotes around a dinner table, but there’s always a design to Enright’s novels, a gradual coalescing of insight.” We gather information as we go along and, in some ways, the reader is left to figure it all out once they finish the book. Her writing gives us a slow accrual of brilliant insight.

Norah’s mother was the famous Irish actress Katherine O’Dell, she of the glorious hazel eyes and red hair (and whose secret, that Norah guarded, was that she was actually born in England), a star of many years of stage and screen. But no, not a star… “We did not use the word star,” Norah tells us. Stars are made; actresses are born.

Norah grew up in a household in Dublin with her mother and a longtime housekeeper. She did not know who her father was, and she had a loving, if tumultuous, relationship with her mother. And while Norah was able to have a somewhat ordinary upbringing, for her mother: “… she walked out the door and was famous all day.”

We learn early on that Katherine is no longer alive. In fact, Norah is now the age that Katherine was when she died: 58. Norah, unlike her mother, is in a longterm loving marriage; Enright makes a point of exploring the ups and downs inherent in such a relationship, the emotional aspects as well as the physical intimacy of it. In part, Enright has said, this book is not just an exploration of a mother/daughter relationship but also a “conversation about marriage,” and she hopes to “reclaim ideas of agency in desire.”

As the person who knew her mother best, Norah is best positioned to revaluate her life, with its successes and its terrible pain. She is also, simultaneously, by embarking on this quest (which is set off by the inquiries from a graduate student who is writing about her mother), going to learn more about herself than she knew she had to learn.

Enright’s control of this story is masterful, and her writing is beautiful. And really, there is nothing like a good Irish novel to turn you inside out and make you see things in a new way. Enright writes that: “Our love has always carried its freight of dread,” and such is the case for Norah.