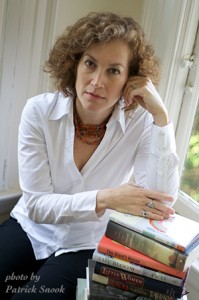 I’ve always enjoyed my career in the publishing industry. What could be better than working with books and writers? I’ve been lucky to have the opportunity to experience publishing from multiple perspectives: as an editor, literary agent, journalist, author, professor, event manager, and as a bookseller. Here are some highlights from my work experience.

Many years ago, when I lived in Brooklyn, I worked at Barnes & Noble in their new Park Slope store. In early 2020, I was proud and excited to rejoin the company. After a (wonderful!) time as an Assistant Store Manager at the Valley Forge, PA, location, in October I moved to Wilmington, Delaware to become Store Manager at the Barnes & Noble in Wilmington. And this past November, 2022, I came back to my home state of Pennsylvania. You can now find me at Barnes & Noble in Plymouth Meeting, PA. Please come visit if you’re in the Philadelphia area!

Prior to joining B&N, I was an indie bookseller. In November of 2014, Open Book Bookstore in Elkins Park, PA opened. Together with Evan Schwartz, we built this community-based small independent bookstore. Our carefully-curated collection of new books won raves from customers, and we took pride in bringing their attention to good new books and building a powerful community-based book shopping environment.

In March of 2020, I relaunched my longtime Open Book events program as Open Book Productions. Under this umbrella, I will continue to provide the popular literary program I have been doing for years, such as the Hot Off the Press book discussion class, author events, and writing classes and retreats for adults and children. What I’ve added is a virtual component. Via Zoom, I now offer online versions of our classes. I also launched the “Lynn Reads a Book” YouTube channel featuring book reviews, author interviews, and even more to come!

A recent interview on The Liar’s Club “Oddcast” about my work and another with the Citizen Lit podcast.

Mentioned in Philadelphia Magazine and interviewed about my reading choices by The Jewish Exponent.

More bookstore press in The Chestnut Hill Local and The Philadelphia Inquirer and The Huffington Post.

As a member of the American Booksellers Association’s 2018 “Indies Introduce” committee, I helped select our top ten books from among hundreds submitted. Here I interview one of the winners, Dawn Davies.

Here is a webinar I led for the Independent Book Publishers Association on the topic of “Indie Bookstores and Indie Publishers/Indie Authors: How to Develop a Mutually Beneficial Relationship.”

When I decided to launch a career in publishing, I knew immediately that I wanted to be an editor and, at heart, I will always be first and foremost an editor. I started out as an editorial assistant in college publishing, and then moved to trade (general consumer) publishing and became an editor at Ballantine Books, a division of Random House. In both of these jobs I acquired and edited serious non-fiction books. As I moved through the editorial ranks at other publishing houses, my work also encompassed working on illustrated books and “books plus” as a Senior Editor at Running Press and Editorial Director at Peter Pauper Press. I’m still available as a freelance editor to help you at any stage of your book project! Email me at lynn@lynnrosen.com.

In 1991, I launched my own literary agency, which I named Leap First, to reflect my belief in taking chances. In my eight years as an agent, I worked with academic authors such as Myra & David Sadker, authors of Failing at Fairness: How America’s Schools Cheat Girls, associations such as the American Dietetic Association, and other inspiring authors such as Byllye Avery, founder of the National Black Women’s Health Project and winner of a MacArthur Foundation Fellowship.I enjoyed helping my clients develop and shape new book ideas.

During my time running Leap First, I also spent a year and a half at Barnes & Noble, serving as the Community Relations Manager for the Park Slope store. I helped to open the store, B&N’s first in Brooklyn, and learned that being a bookseller, carrying and shelving books, is hard physical work. I greatly enjoyed helping customers find books and bringing their attention to new books. As the CRM, I had the chance to organize and run some interesting and popular events for the community. This work eventually resurfaced when I launched the Open Book program in 2003 and begin teaching and running my own events.

A few years into the new century, I had the chance to add another role to my busy roster and to try out something I had always wanted to do: teaching in a university setting. I was asked to teach a course on “How to Write a Book Proposal” for Drexel University’s graduate program in Publication Management. From there, I went on to launch a very successful book discussion course called “A Sneak Peek at Next Year’s Bestsellers” at Temple University’s continuing education program, and also taught writing and publishing at Temple and at the University of Pennsylvania. The Temple U class eventually grew into Open Book.

After a few years of adjunct teaching, I joined Rosemont College as the Director of Graduate Publishing Programs, where I worked for three years and helped to build the program’s visibility and realign the programming, including a new certificate in e-publishing in conjunction with the New York Times Knowledge Network. As far as my own academic career, I graduated from the University of Pennsylvania with an Honors degree in English, and hold a Masters in English and Comparative Literature from Columbia University.

From 2012 to early 2014, I was the Editorial Director for the Publishing Business Group at North American Publishing Company in Philadelphia. In this role, I oversaw the publication of two trade industry magazines, Book Business and Publishing Executive, as well as a daily e-newsletter, Publishing Business Today, and wrote articles and features about the book and magazine publishing business.. I also helped to develop workshops, webinars, and events, and created programming for the annual Publishing Business Conference & Expo in New York. I wrote a weekly industry blog called “Literally Speaking.” I have been the Book Blogger for The Philadelphia Inquirer and written freelance journalist for numerous industry and trade publications.

I enjoyed my stint as Books Blogger for The Philadelphia Inquirer and for City Paper. Such fun interviewing Ian McEwan and Jay McInerney. Also great to talk to my literary hero Ann Patchett as well as Judy Blume, Louise Erdrich, and other author/bookstore owners for a piece in Poets & Writers. For that magazine, I also wrote advice for writers about working with indie bookstores.

I am the author of Elements of the Table: A Simple Guide for Hosts and Guests (Clarkson Potter/Random House). Journalist A.D. Amorosi of Philadelphia’s City Paper calls me “The First Lady of the Fork” and Publishers Weekly magazine calls me “a more forgiving Miss Manners.” Elements of the Table looks at everything on the table—including silver, china, crystal and decorative items—and describes how to properly use it, along with some fun dining history. Did you know, for example, that napkin rings were invented so you could make sure you got the same napkin at each meal, since no one laundered them in between?

Oh, and yes, I’m working on a novel. Maybe someday it will see the light of day!